What do you do when a prospect asks you to explain to them why they should buy from you?

If you follow a non-persuasive sales method like High Probability Selling, you would avoid getting drawn into that kind of a conversation.

Jacques Werth taught his students to say, “I’m not here to convince you,” and then get right back to the question of whether the prospect wants what is being offered, or not.  He might also say something like, “That’s not the way I work.“

However, if the prospect has already said that they want the sort of thing you are offering, then it might be better to respond with the question, “What matters to you?”  And then, only address the things that matter to the prospect.  Keep it short and simple.  You either provide those things, or you don’t.

written by Jacques Werth in about 2006, and posted here by Carl Ingalls

High Probability Selling is a structured, linear, step-by-step sales process. At each step along the way, you, the salesperson, and the prospect both have the option of saying “Yes” or “No”. Prospects close themselves each time they agree to move forward in the sales process.

The Story Behind the Process

The High Probability Selling Process is based upon extensive research of the top 312 performers across 23 industries. They were an elite group—part of the top 1% in their respective industries—who typically out-produced the top 20 percent in their industry by a factor of 3 or 4. Over a period of forty years, Jacques Werth went out on sales calls with top performers, observing and recording everything they did.

The discovery? These sales stars had intuitively created a totally new selling system. They didn’t realize it was a different system. Jacques Werth did. He collected the data, analyzed it, and put it together in this simple yet powerful system—High Probability Selling.

Top performers are the best in the business. They know the difference between a true prospect and one who is merely ‘interested’ – and will hardly ever buy. They know that preparing elaborate proposals is usually a waste of time. They know that the only prospects worth their time are High Probability Prospects: Prospects who want, need, can afford your products and services, and are willing to buy—now.

The most common mistake made by salespeople is that they waste time trying to manipulate, persuade and convince prospects to buy. A lot of time and energy is devoted to activities that will inevitably lead to nothing.

Learn to Focus Your Sales Efforts on Truly Qualified Prospects.

In High Probability Sales Training, we teach you selling skills that are proven and effective. We train you to close more sales by negotiating a series of mutual agreements – beginning with the setting of the very first appointment. We train you to consummate sales with dignity and professionalism – without stress or pressure.

High Probability Selling trains you to close more sales, enjoy selling more, and to earn more money—without compromising your ethics. Is that what you want? If it is, enroll in a HPS sales training course.

Note from Carl Ingalls, on 8 Feb 2022. I copied the above text from a webpage that Jacques Werth had created in about 2006. It is typical of the persuasive style he used when marketing (but never when selling). I prefer to use non-persuasive language in my own marketing efforts, because that is more consistent with what we do and teach in High Probability Selling, and also because I believe it is best to make marketing and selling more consistent with each other. I’d love to hear your thoughts on this. 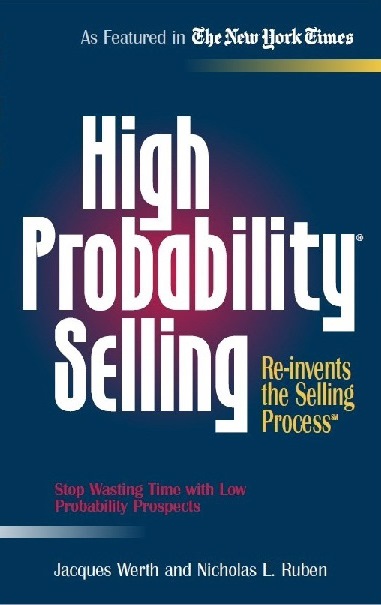 Zoom Meeting – Open to the Public